Start a Wiki
Soggy is one of Boggy's three children who appeared in the first and second installment of the Banjo-Kazooie series.

During Banjo and Kazooie's first adventure, Soggy is sad because she doesn't have a present for Christmas. Banjo and Kazooie solve this dilemma by searching Freezeezy Peak for three presents to give to her and her brothers, Moggy and Groggy. In exchange, the children reward Banjo and Kazooie with a Jiggy. Afterwards, the three can be seen celebrating in their igloo while their father, Boggy, is lazily lounging in his chair. In this game, Soggy wears green pajama pants. The Xbox Live Arcade port of Banjo-Kazooie again features Soggy in exactly the same role.

Two years later, the polar bear children have been separated from their mother, Mrs. Boggy, in Witchyworld. Banjo and Kazooie are charged with the task of finding them, but the cubs aren't too happy about having to leave. To coax Soggy home, the duo brings her some fries from Salty Joe's Fries. Once the children are all returned to Boggy's Igloo, Mrs. Boggy rewards Banjo and Kazooie with a Jiggy. If Banjo and Kazooie talk to Soggy in Boggy's Igloo, she says she hopes Moggy will get in trouble for jumping on her mother's bed, indicating she is somewhat of a malicious tattletale. In Banjo-Tooie, Soggy wears a pink dress with an image of a bumblebee on it rather than her usual green pants. Soggy returns in the Xbox Live Arcade port of Banjo-Tooie.

Soggy, Moggy, and Groggy were planned to appear in the series' latest installment for the Xbox 360, but were cut from the final version of the game because of time constraints. The name of their canceled Jiggy challenge was "Don't Bring Your Kids to Work Day".[1] However, eleven years after the game's release in 2019, Soggy as well as her brother Moggy were discovered to be in the game, not just with completed models, but complete with their own AI namely, that reused from the Minjos. She can be found in Banjoland Act 6, in the mission Home Improvements:Igloo Edition atop of Clanker, far away from where the actual challenge takes place.Moggy Her brother Groggy is not yet confirmed to be in the game. 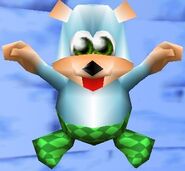 A promotional wallpaper released for Nuts & Bolts depicting Soggy's head on the far right, in the middle row. 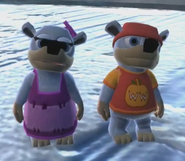 Soggy along with her brother Moggy in Banjo-Kazooie: Nuts & Bolts.
Add a photo to this gallery

Retrieved from "https://banjokazooie.fandom.com/wiki/Soggy?oldid=44785"
Community content is available under CC-BY-SA unless otherwise noted.