View source
watch 01:36
We're Getting Mutants in the MCU - The Loop
Do you like this video?
Play Sound

XBOX 360 Wireless Controller
Sonic & Sega All-Stars Racing with Banjo-Kazooie is a racing game for the Xbox 360 starring characters from many Sega franchises, published by Sega and developed by Sumo Digital. The game was also released for the Wii, PlayStation 3, Nintendo DS and Microsoft Windows, but these versions have "with Banjo-Kazooie" omitted from the titles since Banjo and Kazooie are Xbox exclusive.

The game is a mascot kart racing game, very similar to other games in its genre like Mario Kart, Konami Krazy Racers and Crash Team Racing. Characters race through various race circuits themed on different Sega franchises and collect power-ups to boost their speed or hamper their opponents. Additional boost can be earned by successfully executing drift turns, or performing tricks whilst in midair. Like Sumo's previous Sega game, Sega Superstars Tennis, each character has a special ability (called an "All-Star Move") unique to them that they may use to their advantage (such as Sonic transforming into Super Sonic and AiAi riding in a monkey ball), which they can obtain if they are running behind in the race.

Vehicles are separated into four different categories: racing, off-road, bike and hovercraft. As the terrain on the tracks will vary, vehicles can be either assisted or hindered by the surfaces they drive upon. For example, racing-type vehicles perform best on hard surfaces such as wood or concrete, but are hampered by soft terrain such as mud, sand or snow. The opposite is true for off-road type vehicles. Hovercraft are not affected by any terrain and are able to perform multiple boosts after a jump, but they are unable to drift and have low acceleration. All of the vehicles also have their own specific engine sounds.

By playing through the game, players can earn Sega Miles that can be spent in the in-game shop to unlock additional content such as characters, tracks, art and songs.

The game will have customizable multiplayer options for up to four players on split-screen and eight players online, including Free Races and Arena Modes. There will also be a Grand Prix mode and a Mission mode.

The game was showcased at E3 2009, where it was stated that the final version of the game will have over 20 different characters.

At Summer of Sonic 2009 Steve Lycett, Executive Producer and Travis Ryan, Lead Designer of Sonic and Sega All-Stars Racing were present for a Q&A. A PlayStation 3 demo was also available for attendees to play. It was identical to the Comic-con demo.

On November 25, 2009, a special press event about the game was held in France, where the DS version made its playable debut.

As TSSZ News yesterday reported, Sega themselves did upload to their official website the definitive box arts for this third party title, coming in early 2010. The surprise came from the Xbox 360 box art, which was the only one featuring a console specific character: on it, Banjo and Kazooie are chasing Sonic in a big red car, known as the Bolt Bucket, which doesn’t look very similar to their Nuts & Bolts contraptions (It does have elements from N&B in it, however, such as the Engine and Fuel Tanks)

The Wii version of the game originally planned to have Mario as a console specific character for that system, but was scrapped due to unwanted cross-contamination with the Mario and Sonicseries.

These characters above are only playable in events through hacking on PC via guide by DaGuAr. 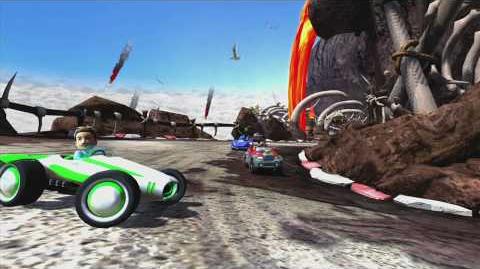