“To free the trapped one, a star must appear before the sun rises. Another star appears followed by two moons. Does that help?”
—A Stony, Banjo-Tooie


The Stonies are rock-like creatives native to Mayahem Temple, although one Stony can be found within the Colosseum on the lava side of Hailfire Peaks. Stonies look like small, relatively featureless rocks from a distance, but will spring to life when approached, growing arms, feet, eyes, and a crown- or headdress-like decoration on their head. Stonies have their own language and speak in phrases which sound uncannily like rude insults (such as "kik yu butta" and "kaz-o-iee dym bird"); using the Stony transformation, Banjo and Kazooie can speak to Stonies for tips and hints.

The Stonies which play kickball in the Mayan Kickball Tournament and Colosseum Kickball Tournament have a much more aggressive and intimidating appearance than normal Stonies, sporting a large chin with a sharp-toothed under-bite and angry red eyes. 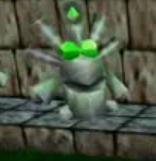 Stony speaking
Add a photo to this gallery

Retrieved from "https://banjokazooie.fandom.com/wiki/Stonies?oldid=44013"
Community content is available under CC-BY-SA unless otherwise noted.