Submarine Banjo is the transformation of Jolly Roger's Lagoon. It is controlled in the same fashion as the Talon Torpedo: turn it with the

and propel it forward with

. For combat, you can fire torpedoes at distant foes with

to unleash a Sonar Ping attack against closer enemies. The Submarine is the only way to get to the bottom of the Lockers Cavern and play Grunty's Submarine Challenge. The Submarine can be used to fight Lord Woo Fak Fak, making it the only transformation (aside from Dragon Kazooie) able to fight a boss. This also makes the battle slightly easier due to the faster and easier movement underwater, and the homing function of the torpedoes (not to mention the infinite supply).

Submarine Banjo also has infinite air underwater, but this is only relevant if you have not used the Oxygenate Water spell.

Submarine Banjo cannot warp onto land using the Warp Pads; however, through a possible oversight in the submarine's traversal range, it can be driven straight out of the water onto land. Simply backtrack through Atlantis towards the entrance in the bay, use the sonar ping to freeze the Inky and drive up the ramp in the bay onto dry land, allowing you to explore the town and surrounding areas as the sub. However, you can not get past the stairs, in accessing Jolly's, Pawno's shop, Mumbo's Skull and the exit, but you can still access Turtleview Cave, Blubber's Waveracer Hire, and the small pool with Piggles and Trotty.

A model of the Submarine transformation appears in Banjo-Kazooie: Nuts & Bolts as an exhibit in Banjoland near the entrance. 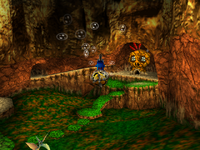 Submarine Banjo is Swimming in Terrydactyland. 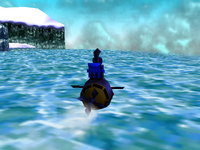 The Submarine Banjo floating on the ice water. 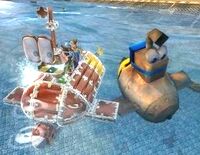 Transformations in the Banjo-Kazooie Series

Retrieved from "https://banjokazooie.fandom.com/wiki/Submarine_Banjo?oldid=46453"
Community content is available under CC-BY-SA unless otherwise noted.