Super Smash Bros. Ultimate is a fighting game for the Nintendo Switch. It was first teased on March 8th, 2018 at the end of a Nintendo Direct video presentation, and was fully revealed on June 12th at E3 2018. It is the fifth installment in the Super Smash Bros. series (sixth if both versions of Super Smash Bros. 4 are counted separately). The game was released worldwide on December 7th, 2018.

Banjo & Kazooie were announced as playable characters via the Best Friends trailer aired during the E3 Nintendo Direct on June 11th, 2019. They will be released as downloadable content in Fall 2019 - they will be the third DLC character released through the Fighters Pass, and the fourth downloadable character overall. They are classified as Fighter #73.

Spiral Mountain will also be included as a playable stage, along with a new version of the level's music arranged by Grant Kirkhope which incorporates a medley of melodies from many other Banjo-Kazooie levels[1]. Gruntilda, Mumbo Jumbo, and Bottles will make cameo appearances as background characters on the stage![2]

Banjo & Kazooie are back!

They're back again with the Breegull Bash
'Cause this pair are ready to Smash!

One of Banjo & Kazooie's alternate palettes: a cute pink/orange combo! Here's hoping they'll have green/purple as an option too, the Playtonic ideal of colour choices.

Spiral Mountain returns, as does an Extra Life above Banjo's chimney!

"Handsome Mumbo show up on shiny new Nintendo console! Mumbo magic too strong for Assist Trophy, but have coolest cameo in whole game."

Bottles can hardly believe his eyes!

"You are familiar with Bayonetta
But as witches go I am much better!"

"Yes, I'm back, with rhyming prose
To watch the bear get smashed by Bros.!"

The Jinjonator awakens after a long, long slumber.

Thankfully a new Terminator film is being released in 2019, making this reference somewhat relevant once again

King K. Rool suffers a grievous Jinjury
Add a photo to this gallery 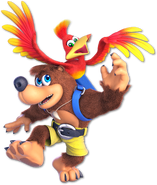 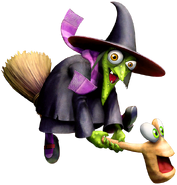 Buzzbomb
Add a photo to this gallery

Retrieved from "https://banjokazooie.fandom.com/wiki/Super_Smash_Bros._Ultimate?oldid=44443"
Community content is available under CC-BY-SA unless otherwise noted.