Promised by Mumbo Jumbo in Banjo-Kazooie, in the sequel, Banjo is transformed into the most fearsome and famous of the dinosaurs: Tyrannosaurus Rex. However, at first, he may only become a Baby T-Rex; once Mumbo casts Enlarge on Humba Wumba's Wigwam, Banjo can transform into a Daddy T-Rex, which is much more loyal to the image of an enormous, terrifying beast. Each size is better suited to different tasks around Terrydactyland, each with different strengths and weaknesses. Both also must be used to activate certain switches pertaining to each of them. The Daddy T-Rex appears in a glass case in Banjoland.

As the smaller Dino, Banjo is able to fit into certain places and speak with other dinosaurs (the Soarasaurus will attack indiscriminately. The Bargasaurus won't attack, but they hurt you if you touch them). He may also use a roar to enter doors with the Baby T-Rex face on it. He is around Banjo's size, or maybe a little bigger. However, this T-Rex has a smaller life bar than Banjo, and has no form of defense.

The Daddy T-Rex is so large he can only fit in the main outdoor area. His thunderous roar can kill enemies, as can merely stepping on them if they are small enough. He can also eat smaller enemies. He is able to frighten the braver cavemen that the Baby form could not. He is about as big as a cliff. The one downside to this form is that he's too big to use warp pads, which can be troublesome if you want to change back but get lost. For an unknown reason, the Daddy T-Rex has an oxygen bar. There is a chance that Rareware had this for a reason in the beta version, but forgot to remove it. 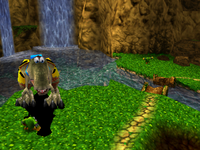 The Daddy T-Rex Banjo is in Spiral Mountain. 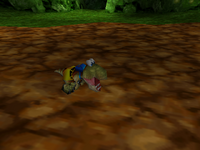 The Baby T-rex Banjo is in the Digger Tunnel. 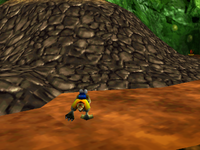 The Baby T-Rex Banjo is in Plateau in Isle O' Hags. 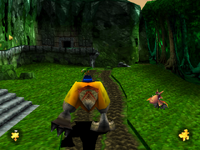 Daddy T-Rex Banjo is in Wooded Hollow in Isle O' Hags.
Add a photo to this gallery
v •  e

Transformations in the Banjo-Kazooie Series

Retrieved from "https://banjokazooie.fandom.com/wiki/T-Rex_Banjo?oldid=46350"
Community content is available under CC-BY-SA unless otherwise noted.