A Tee-hee is a ghastly green ghost with facial features resembling those of a Grublin. This enemy is found in just about all areas of Mad Monster Mansion, hovering around and chasing after intruders while snickering all the way. Do not try attacking this baddie unless you have an ample supply of Golden Feathers with you, since the only thing that can take this baddie down is the Wonderwing ability.

A large Tee-hee named Napper resides in the dining room of Gruntilda's Mansion. He guards a Jiggy for Grunty, but has a tendency to snooze off every once in a while.

During the mini-game with Tumblar inside the shack, a purple Tee-hee patrols the game board in a counter-clockwise circle. Although it can be defeated using the Wonderwing, it respawns immediately and will only yield a honeycomb the first time it is killed, so it is best to just avoid it.

Tee-hees bear a remarkable resemblance to the Green Spookos, which are similar ghostly enemies found in Banjo-Kazooie: Grunty's Revenge. Their facial features also resemble the Twinkly Munchers from Freezeezy Peak 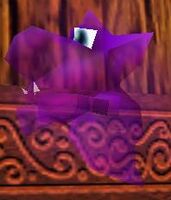 The purple Tee-hee in Tumblar's shack.
Add a photo to this gallery
v •  e

Retrieved from "https://banjokazooie.fandom.com/wiki/Tee-hee?oldid=46417"
Community content is available under CC-BY-SA unless otherwise noted.