Banjo-Tooie (XBLA)
Terrydactyland is the fifth world found in Banjo-Tooie. In this world, dinosaurs, pterosaurs and other prehistoric creatures mysteriously never died out and now live alongside tribes of cavemen. The environment is characterized by a rocky terrain as well as steep ridges surrounding a central mountain. 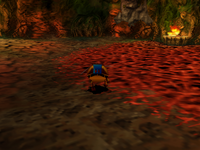 The Stomponadon in the Stomping Plains