The Salty Hippo is the ship of Captain Blubber the sea hippo (hence the name) that crashed ashore on Treasure Trove Cove in Banjo-Kazooie. Captain Blubber asks Banjo to swim into the lower areas of the ship and retrieve his treasure in exchange for a Jiggy. At the top of the ship up the cargo netting is a Bottles molehill in which Kazooie is taught how to Fly. Conveniently, there is a Flight Pad next to the molehill near the top of the mast. At the very top of the mast, there is a green Jinjo.

In Banjo-Kazooie: Nuts & Bolts, The Salty Hippo returns in Banjoland, half-sunken in the lake area with only a net keeping it together.

"Captain Blubber's pride and joy, the Salty Hippo first appeared in Banjo-Kazooie's Treasure Trove Cove. It has never been seen in good working order, possibly due to its useless hippo captain."

In Jolly Roger's Lagoon from Banjo-Tooie, there is sunken ship at the bottom of one of the underwater caverns which many players believe to be the Salty Hippo. However, when the name of the ship is asked during the Tower of Tragedy quiz, "The Salty Hippo" appears as an incorrect answer, the correct answer being "It has no name."

The ship in Treasure Trove Cove. 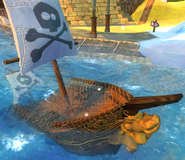 The Salty Hippo in Banjoland.
Add a photo to this gallery
Retrieved from "https://banjokazooie.fandom.com/wiki/The_Salty_Hippo?oldid=42741"
Community content is available under CC-BY-SA unless otherwise noted.