Welcome to the Banjo-Kazooie Wiki!
We are currently working on 909 articles, and you can help.

Welcome to the Banjo-Kazooie Wiki! If you are new here, feel free to create a free account. Or, if you do not wish to edit here, you can simply look at our information about the game series.

Create a new article here! Just type the name in the box below:

Not sure where to start? 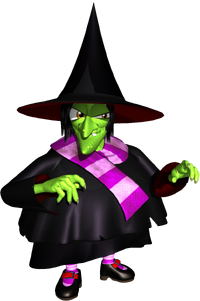 Gruntilda Winkybunion (often called Grunty for short) is the main antagonist of the Banjo-Kazooie series. She is a wicked witch with magical spells that are capable of doing anything, even going as far as death. She also enjoys rhyming, which really annoys Grunty's three sisters somehow. Grunty also keeps her spells in a book named Cheato, who doesn't enjoy Grunty's plan of becoming beautiful and decides to help Banjo and Kazooie.

In Banjo-Kazooie, Grunty kidnaps Banjo's sister Tooty and plans to steal her beauty so she can be the most beautiful woman in all of Spiral Mountain.

Two months later in Grunty's Revenge she inhabits a robotic form of herself called Mecha-Grunty, and plots to prevent Banjo and Kazooie from ever meeting.

Two years later, in Banjo-Tooie her sisters Mingella and Blobbelda join her in an attempt to restore Grunty to her former body.

Read more about this article... | Nominate a featured article...

Add a Quote | See All Quotes


"Join me now and dump the bear, that little backpack then I'll wear!"

Add a Fact | See All Facts

<poll> What is your favorite color Jinjo in the Banjo-Kazooie series? Purple Blue Green Orange Red Yellow White Brown Black Grey </poll> Vote on other polls at the Poll History.

Submit your poll ideas on the Poll Suggestions Page.

Retrieved from "https://banjokazooie.fandom.com/wiki/User:Dekudan312/Dev?oldid=33082"
Community content is available under CC-BY-SA unless otherwise noted.