Weldar the Visually Impaired Welding Torch is a welding torch that suffers from partial-blindness found in the depths of Grunty Industries in Banjo-Tooie. He is regarded by many to be one of the most difficult bosses in the game, and simply reaching him is a long, arduous process. Weldar was left mortally wounded after battling the duo in Banjo-Tooie, but his immobile, dismembered head still lives in Grunty Industries and parts of his ruined body live on, being turned into vehicle part in Banjo-Kazooie: Nuts & Bolts.

Weldar is a large personified welding torch (although Kazooie initially mistakes him for a toilet cleaner). He has a large, metallic, cylindrical base with 6 square plates on it that seem to keep his body from overheating, as well as a large yellow apparatus surrounding him and two gauges on his base. His hose and nozzle have snake-like qualities, including sharp teeth. His neck-like hose appears to be bendable and strong enough to drag himself across the floor just before the boss battle begins. He also has vision problems, a trait shared with most species of snakes. Weldar's eyes are visibly damaged, with one of his pupils being slightly smaller than his other. Whenever Weldar opens his mouth, he expels a sleek, bright blue flame.

At first, it would seem that Weldar also has problems moving around, seeing as how he had to drag himself out using only his head and neck before the fight ensued. However once the battle begins, it becomes apparent that he is very capable of movement, easily jumping around in hopes to flatten the duo.

The vehicle part Weldar's Breath in Banjo-Kazooie: Nuts & Bolts, being made from bits of Weldar, has the same basic concept. It retains his long snake-like head and neck, although its body appears to be a propane tank rather than an actual welding torch.

Weldar is found in the basement of the Repair Depot, which cannot be reached until numerous tasks have been accomplished around the factory. Once Banjo and Kazooie arrive, Weldar struggles to drag himself to the arena, tricking the duo into thinking a victory is all but ensured. After propping himself up and assessing the duo, he thinks that Banjo is a bear, though he can't quite tell due to his poor eyesight and states that bears are not to be allowed into the building. Banjo hesitantly lies and replies that he isn't. Weldar then says that he forgot to wear his glasses, but since he went through the trouble of dragging himself out, that he might as well fight them anyway (if the player ends up dying and rematching him, Kazooie will confirm that Banjo is indeed a bear, and makes clear that they intend to send Weldar to the recycling plant before he can do anything to them).

The battle follows a very simple pattern. First, he begins by shooting out blue fire balls which Banjo and Kazooie can easily dodge. Weldar then tries to suck up Banjo and Kazooie like a vacuum, which is their chance to shoot a flammable egg (Fire Eggs, Grenade Eggs or Clockwork Kazooie Eggs) into his mouth. As one of the six red plates breaks off his body, Weldar warns them to refrain from doing that because he is full of flammable gas. Weldar then launches; Washup, Boltoid, and Nutta at the pair, which can easily be dispatched. After they have all been defeated Weldar will try to inhale them again, giving them another chance to damage him. Now suffering even more damage Weldar leaps into the air and drops down in an attempt to crush the pair.

After landing he proceeds to vigorously chase them around battlefield. He will then try to suck them up again, which is their chance to damage him.

After three hits have been dealt, Weldar then turns on an emergency switch which activates the cables on the floor. Electricity surges through them, meaning the duo must be nimble and not step on the electrified wires while Weldar attacks them. He then does all of his attacks in the same order again. After the sixth and final plate has been broken from his body, Weldar exclaims that his welding days are over and overheats and explodes. His severed head flies across the room and hits a high voltage box, stopping the fan in the Air Conditioning Plant allowing Banjo and Kazooie to get the Jiggy behind it. Weldar gives the duo a Shock Spring Pad to use as an exit the Repair Depot and get back to the rest of the industries. He also lets slip that he had a Jiggy stashed within the industrial fan before admitting the fan's destruction made its place as a safekeeping spot irrelevant, only to curse himself for exposing its location.

Weldar's head can be conversed with after the battle. He states that his poor eyesight is now the least of his worries, and asks the duo if they know any good repairmen.

In Banjo-Kazooie: Nuts & Bolts, Mumbo Jumbo explains that he found parts of Weldar's body in the trash and turned him into a compact flamethrower called Weldar's Breath. It causes high amounts of damage, but by the same token also consumes a lot of ammo. When activated, it expels a powerful stream of fire.

Oddly, although it is made to resemble Weldar, complete with 'eyes' and 'teeth', the colors of Weldar's Breath do not match Weldar's coloration in Banjo-Tooie at all, and is entirely red instead of black and gold. However, when it is painted black it seems to vaguely match Weldar's original color palette.

Only two of these parts can be obtained over the course of the game.

Before the boss battle:

If Banjo and Kazooie lose the battle, and then come back:

If Banjo and Kazooie try to strike up a conversation: 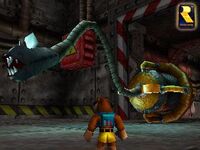 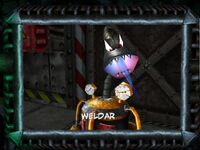 Weldar in the cast parade.
Add a photo to this gallery
v •  e

Retrieved from "https://banjokazooie.fandom.com/wiki/Weldar?oldid=46127"
Community content is available under CC-BY-SA unless otherwise noted.