Banjo-Tooie (XBLA)
Banjo Pilot
Witchyworld is the third level in Banjo-Tooie. It is a rundown, decrepit theme park with broken, dangerous rides and other unwelcome attractions. It had such a bad safety record it was closed down some time ago. It is run by deranged and hostile employees that will attack anyone on sight, as well as perverse purveyors running the unsanitary food stands. Witchyworld also has strict constraints on taking out food off of the park's premises. Any food that Banjo and Kazooie try to sneak out of Witchyworld is immediately confiscated, unless a certain route is taken.

The park is divided into four sections, not counting the entrance or Big Top; the Space Zone, the Haunted Zone, the Wild West Zone, and lastly another space-based zone called Area 51. Each "Zone" has different scenery and attractions. The Space Zone has the Saucer of Peril, Dodgem Dome, and the Star Spinner. The Wild West Zone has an inflatable bouncy castle called the Crazy Castle and the Cactus of Strength. Finally, the Haunted Zone has the Dive of Death, the Inferno, the train station, and a freak-show consisting of an "Ancient Bearded Camel", a "Mighty Evil Dinosaur", and a "Weird Killer Alien". However most of the rides are out of service, and require a jolt of electricity from Mumbo to jump start them.

The entrance is a locked gate located in the Pine Grove. It was originally meant to be in Banjo-Kazooie, but was put on hold due to time delays.

This area was also featured in Banjo-Pilot.

Shortcuts to Other Worlds

Saucer of Peril in the Space Zone

The slide in The Inferno 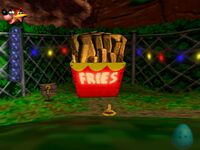 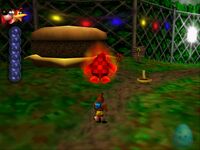 Bowser's face in The Inferno?