Banjo-Kazooie Wiki
Register
Don't have an account?
Sign In
Advertisement
in: Characters, Characters from Banjo-Kazooie, Males,
and 3 more

“Wow, another walrus! Take this... But watch out for a smelly brown bear and his ugly bird partner.”
—Wozza, Banjo-Kazooie


Wozza is a walrus who lives in his own cave in Banjo-Kazooie in the area Freezeezy Peak. Wozza is rather lonely and longs to see another walrus. If Banjo tries to approach him outside his cave in his regular form, Wozza runs away and hides. However, if Banjo approaches him when he becomes a walrus, Wozza gladly rewards the disguised bear with a Jiggy before retreating inside his cave. If Banjo and Kazooie later go inside his cave, Wozza screams and begs the two to leave, but not before taking a noisy orange Jinjo that also happens to be living inside his cave.

A secret passage in his cave leads to a room with an Extra Honeycomb. His cave is also known to have the legendary Ice Key, one of the mysterious Stop 'n' Swop items. Wozza can be found warming up next to a fire inside his cave, which hurts Banjo and Kazooie if touched. 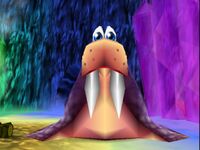